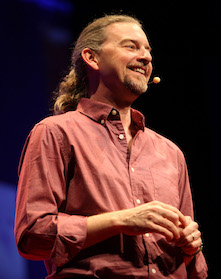 Dr. James Coan is Professor of Psychology and Director of the Virginia Affective Neuroscience Laboratory at the University of Virginia. Dr. Coan has consulted for clinicians, businesses and researchers, working with groups as diverse as the Oregon Social Learning Center, the Anna Freud Center, the Kurt Lewin Institute, and the Community of Democracies. He is co-editor of the Handbook of Emotion Elicitation and Assessment and has authored more than eighty peer-reviewed articles. His work has been covered in Science, Nature, the New York Times, The Washington Post, Time Magazine, the New Yorker, The Atlantic, NPR, The Today Show, and other major media outlets.  Dr. Coan received the inaugural Janet Taylor Spence Award for Transformative Early Career Contributions from the Association for Psychological Science, and the Award for Distinguished Early Career Contributions from the Society for Psychophysiological Research. He has appeared as an expert for several episodes of National Geographic’s Brain Games, is a fellow of the Mind and Life Institute, produces the podcast Circle of Willis, and serves as Chief Scientific Advisor at Movius Consulting.